The Mighty Marvel Mayhem Show & My Quest to Read (or re-read, as the case may be) the Entirety of The Marvel Universe 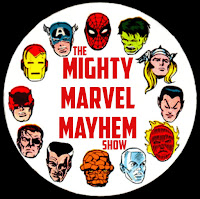 A few months back, as I (along with many others, I am sure) contemplated what exactly to do with myself in the middle of a pandemic, I came up with the idea of going back to my comic book loving childhood, and take a stab at reading (or re-reading, as the case may be) all of The Avengers comics from the very beginning (which would be 1963 btw) to the latest release. It was going to be a big challenge but hey, what else did I have to do at the time? Movie theatres, my homes away from home, were all shuddered for the time being, so what the hell. I mean, it would only be about 500 or so comics til I was done. Easy peasy, lemon squeezy.

So, if one were to begin at Fantastic Four #1 in 1961, the beginning of the Marvel Age of Comics, then we are talking more than 31,000 comic books to read (or re-read, as the case may be). But hey, that wasn't really the beginning of Marvel Comics. For that we need to go all the way back to 1939, and the release of Marvel Comics #1. Back in these early golden days, Marvel was still known as Timely Comics, but it was still Marvel. Now with this expanded reading list, we are now talking nearly 50,000 comics. Add in the Marvel magazines of the 1970's and we top 50,000 comics. Back to huzzah, huzzah indeed. So, to do the math for you, if I were to read 14 comics a day on average, I would complete my quest in just ten years. Yes, if you are asking, I am crazy.

Now hopefully the pandemic is not going to last that long. Ideally, at the point of writing this weird little essay of my obsessive craziness, we should be back to some sort of vague normalcy by the middle of Spring 2021. Maybe even full normalcy by the end of Summer 2021. Whatever the case, there was no way I was going to finish this project by the time the masks came off. And yes, that is wishful thinking. To be done by next September, one year after I began, I would need to read, on average, 137 comic books every damn day. Yeah, that ain't happening. First of all, pandemic or not, I do have a life. Plus at some point, I will be back to work (once the unemployment benefits dry up). And there are so many movies to watch, even if they are not in theatres right now. Thankfully streaming has taken over the new release cinema calendar, though my biggest thing missed right now is going to the movies. Anyhoo, I digress.

So, if this quest is going to be long term (my estimate is 13 years) then I might as well hunker down and do it. But I also want to share my quest with other people. This is where Youtube comes in. I have wanted to do some sort of Youtube show for a while now, but procrastination is kinda my mutant super power, so it never came to fruition. That is until the last week of August 2020. That is when The Mighty Marvel Mayhem Show premiered to the world on the aforementioned Youtube. This show, simply enough, would be me, in front of the camera, talking about My Quest to Read (or re-read, as the case may be) the Entirety of The Marvel Universe. I would kick it off with a look at Fantastic Four #1 and move on from there, occasionally having flashback episodes to the Timely (and Atlas) comics days of pre-Marvel Age of Comics. This show would also have episodes dedicated to the cartoons and TV shows and movies of Marvel history, as well as toys and games and trading cards and pretty much anything and everything else. There would be countdowns and interviews, and once we can have them again, episodes shot at comic book conventions and at comic shops.

And now it exists. As of the writing of these words, episode 24 has now been posted for all your viewing glory. So why not head on over to The Mighty Marvel Mayhem Show on the Youtubes, and check it all out. You will not be sorry. Okay, maybe you will be, but hopefully not. I even have a coupla episodes guest starring the actual Spider-Man. That's right true believers! So get on over there and check it out. Ya know ya wanna. Excelsior! 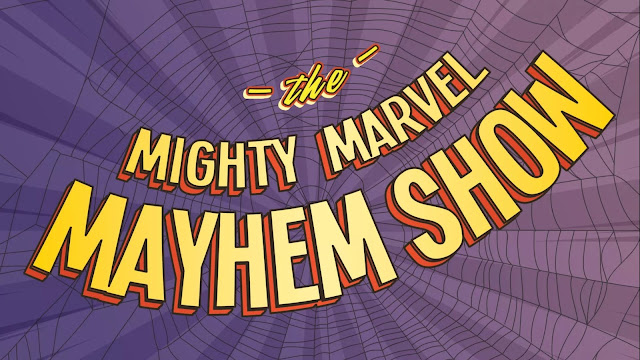