Showing posts from April, 2022
Show all

Film Review: Everything Everywhere All at Once 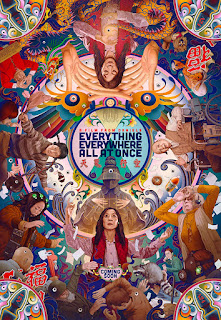 Take Stephen Chow's Kung Fu Hustle. Blend in some Crouching Tiger Hidden Dragon. Toss in a dash of Wong Kar-wai. Fold in some screwball comedy and a smidgen of nihilism. Toss it all together with society's recent fascination with the idea of a multiverse, and you have Everything Everywhere All at Once - a movie that definitely lives up to it's portentous title. Directed by Dan Kwan and Daniel Schienert, known collectively as Daniels, Everything Everywhere All at Once is the tale of Evelyn, a struggling, dissatisfied wife and mother and owner of a laundromat. Her life didn't go as expected and now she is just going through the motions. Her husband wants a divorce (though she doesn't know that yet), her father is a burden, her daughter and her do not get along, and now she's brought home her girlfriend as an added shock to the system. All the while, she is being audited by the IRS and may end up losing her business - on top of losing her husband and daughter. It&#
Post a Comment
Read more
More posts