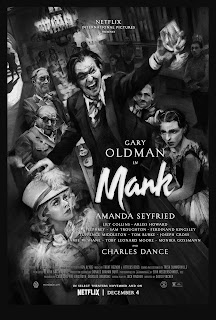 Citizen Kane is the greatest film ever made. Yes, this is a bold statement, but it has been quite the irrefutable one for decades now - at least among the cinephiles and cineastes of the world. Upon it's release in 1941, it was a mild sized success at the box office, even earning itself nine Academy Award nominations and winning the Oscar for Best Screenplay, a point of contention that will become the basis for the film we are reviewing here today - but more on that in a bit. The film's initial release also sparked  quite the controversy, as it was a not very subtle (not even close) attack on the life of newspaper magnate and one of the most powerful men in America at the time, William Randolph Hearst, with the larger than life Orson Welles as the equally larger than life Charles Foster Kane standing in for the (again) equally larger than life actual figure of the tycoon Hearst. Director, producer, and star Welles, along with screenwriter Herman Mankiewicz, the latter of whom had been a friend to Hearst and his movie star mistress Marion Davies, had to go into hiding for a bit. It was a crazy time.

After this though, the film fell from it's high horse perch and wasn't really seen or discussed much until it made it's way to Europe in the 1950's, and became something of a born again phenomenon. It's ascendency to the top spot in film history was cemented in 1962, when the decennial Sight & Sound poll named it the greatest film of all time, a position it would hold in subsequent polls in 1972, 82, 92, and finally 2002, before being knocked down to the number two spot in 2012 by Hitchcock's Vertigo. During this era of 1962 onward, Kane has been at or near the top in almost any and every cinematic poll or list or countdown or what have you. And even though it is all semantics and matters of taste, whether one agrees or not (and although it may not be my favourite, this critic does indeed agree that it is the greatest), the extremely overwhelming consensus that Citizen Kane is the greatest film ever made can not be refuted. Groundbreaking in nearly every aspect of it's construction, from the acting style of this rag tag team of cinema newbies (most of whom were brought over from Welles' Mercury Playhouse to make their film debuts) to the cinnamon roll like curving of the screenplay (again, more on that in a bit), to the deep focus, low angled photography of Gregg Toland. Without Kane, cinema would look a lot different today. But then there is that screenplay, which is the deep focus of David Fincher's Mank.

The idea that the screenplay for Citizen Kane, credited to both Mankiewicz and Welles, both of whom were handed Oscars for it's creation, was actually a one man job by Mankiewicz, began in a 1971 essay called "Raising Kane" by the love her or hate her film critic Pauline Kael. For the record, this critic loved and hated Ms. Kael at varying times. Anyhoo, Kael, who also called Kane one of the greatest films of all time, claimed that Herman J. Mankiewicz, and Herman J. Mankiewicz alone, was the author of Citizen Kane, with the egotistical Welles forcing his name upon the credit page. Now a story like this has a foot in reality, as Welles was indeed an egomaniac and quite controlling in his position as director - but then again, what film director isn't? The main problem with Kael's claim is that she was, simply put, wrong. Mankiewicz died in 1953, so he could not toss his hat into the ring of this fight and go tete a tete with Welles himself. But alas, he did not have to. Refuted by Welles friend and scholar Peter Bogdanovich, along with a slew of others in the industry, including Welles' own secretary (who recalled typing up multiple rewrites by Welles), Kael's story was debunked. Just the fact that Welles was such a credit hog is put to rest by the filmmaker sharing his director credit card with cinematographer Gregg Toland - a thing that I have never seen done before or since. Yes, Mankiewicz did write the first draft in 1940 while, as Fincher's film shows, convalescing from a broken leg, but then Welles rewrote it several times until the final product was finally put onto celluloid in 1941. And thus the idea of Kael's claim, refuted and debunked as it was, became the essence of the film Mank. So, let us stop blathering on about Orson Welles' Citizen Kane and start blathering on about David Fincher's  Mank.

To discuss Mank though, we need to go back to the 1990's. This is when Fincher's father, Jack Fincher, a writer and journalist (much like Mankiewicz himself) wrote the original screenplay for Mank. Fincher the younger meant to make the film after he got through making The Game in 1997, but that idea never came to fruition. Well at least not until last year when principal filming began on Mank. 22 years after his first attempt, and sadly, 16 years after Jack Fincher's death in 2003. The idea that Welles as an auteur had nothing to do with the screenplay of Kane is a strange idea coming from an auteur filmmaker such as Fincher, but here it is anyway. Granted, the screenplay was edited since Jack wrote it (though, perhaps significantly considering, he is still given 100% credit), making it a bit less anti-Welles, but it is still the story of what brought Herman J. Mankiewicz to where he could write that aforementioned first draft of Kane in 1940.

Much of the story takes place in flashback to Mank's life as an alcoholic screenwriter-in-residence at the fabled MGM Studios throughout the early sound days of the late 1920's and 1930's. Played with the greatest of aplomb we have come to expect from Gary Oldman (even though the 62 year old actor is nearly twice the age of the character he is playing in said flashbacks), this is easily one of the most bravura performances of a bravura performance laden career. We see Oldman as the titular Mank as he becomes fast friends with starlet Marion Davies (played with a great gleeful exuberance by Amanda Seyfried, who may very well be on her way to an Oscar herself) and her own personal master of ceremonies, the aforementioned larger than life William Randolph Hearst, played by Charles Dance. Mankiewicz's relationship with Davies may be enlarged for the sake of the narrative here though. We do get to see, in quick old Hollywood bursts, the likes of legends from Norma Shearer to Irving Thalberg to Josef Von Sternberg to MGM bossman Louis B. Mayer, who acted as Hearst's inside man in Hollywood. But glitz and glitter aside, this is the story of Herman J. Mankiewicz's slow decline from respected screenwriter to drunken joke to Oscar winner.

Shot by Fincher and his cinematographer Erik Messerschmidt, to emulate the style of Welles' and Toland's Kane, Mank ends up not just being a film about a certain time in Hollywood, but looking and feeling like it is a film from that certain time in Hollywood. Deep focus, low angled shots, an ornate always moving background. The film, from a technical standpoint, is brilliant, and looks and feels every bit a classic all on it's own. Shot digitally in black and white (and not in color and then transferred to monochrome) Fincher even added the reel change 'cigarette burns' that make it look like it is actually on the celluloid of old. The celluloid of old that this critic, and one-time theatre projectionist, misses like the dickens. Combine this feeling with the stellar performance of Oldman, Seyfried, Dance and others (Arliss Howard as L.B. Mayer is another highlight) and you are left with one of the most stunning motion pictures of this otherwise ugly pandemic year.

Hollywood loves movies about Hollywood, and thus Mank is a smart pick for the Best Picture Oscar, as well as several others, including cinematography, editing, production design, original score for Trent Reznor & Atticus Ross, who already won the award for Fincher's 2010 film The Social Network, the aforementioned Seyfried win, and even a posthumous award to the late Jack Fincher, and a best director Oscar for his son. Oldman himself will probably not win due to the raves that the late great Chadwick Boseman is getting for the yet to be released Ma Rainey's Black Bottom (two posthumous Oscar winners in one year!?) but that of course does nothing to diminish his performance as Mank - one of the finest of his career.

There is one scene later in the film, where Oldman's drunken uninvited Mank crashes a party at Hearst's San Simeon (a scene that reportedly took over 200 takes to get right in the eyes of the Wellesian perfectionism of Fincher) that alone should cement it's inevitable victory come Oscar night, as well as it's standing in future film history. Those not attuned to the ways of cinematic history may not get a lot of the touches Fincher puts into his film, but the stunningness of everything else should still work to keep them enthralled throughout. For those who are indeed attuned to the ways of cinematic history, this is a must see film. A must see film for cinephiles of all ages (even if it badmouths one of my idols a bit) and, as I said before (but must say again) is one of the best films to come out of this ever so strange year of 2020.