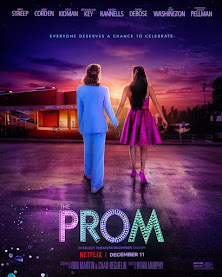 Yes, Ryan Murphy's The Prom is cheesy, but like much of the auteur's small screen output (Glee, Scream Queens, Pose), it's a fun kind of cheesy. Now don't get me wrong, as fun as The Prom is, and it is fun (more on the reasons in a bit), it's not necessarily a great film. A fun film yes. It's not the kind of musical that gets to sing and dance on the level of those great classic Hollywood musicals from which it takes it's "let's put on a show" chutzpah, nor is it in the same playing field as a lot of the better examples of modern musical theatre such as Kinky Boots or Hamilton or The Book of Mormon, the latter of which Murphy borrows both a Tony Award nominated star and the frenetic energy of The Prom's best musical number. It's not on any of these levels, but it sure is fun once all the musical numbers begin kicking in. And isn't that all that matters here in the depressive throes of 2020?

In fact, it is these musical numbers that make the film shine as much as it does. Stars Meryl Streep, James Corden, and Nicole Kidman are great in the so-called in-between times (the non singing, non dancing moments), but it's the song and dance fervor that makes The Prom kick into second gear. Granted, The Prom does have a solid story in these in-between times. High school prom is cancelled due to the homophobic bigotry of the PTA, and a gaggle of Broadway has beens and never were's make the trek to the small Indiana town to save the prom for the school's token out and proud lesbian, and maybe open up the minds of the students and their parents in the meantime. But no matter how important such a message is, and it is indeed an important message, the thing that really flies in The Prom, are the musical numbers - and fly they do.

The aforementioned trio of stars get to shine in various numbers - and this is where the aforementioned fun comes in. Streep & Corden's opening number sets the perfect tone for the film. The hilarious yet condemning narcissism of these two characters (Streep's Dee Dee Allen carries her Tony Awards around in her purse - an admittedly hilarious moment in one of those in-between moments) is a key proponent of the story that seems to shine more on their attempt to save the prom than on the prom itself or young Emma, who is the crux of the prom cancelling bruhaha. We even get to hear La Streep rap in a closing number that was written directly for Murphy's big screen adaptation of the Tony nominated musical.

Meanwhile, Kidman is allowed to shine in her Chicago/All That Jazz inspired number, "Zazz," along with newcomer Jo Ellen Pellman as the optimistic and perky as all get out Emma, who incidentally does a great job keeping up with these big name stars surrounding her. The film, like the stage version, is filled with fun song and dance numbers, including Dee Dee's "It's Not About Me" (when it most certainly is - at least until she finally learns a bit of humility via Keegan-Michael Key as the caring school principal and Streep's love interest) and Emma's guitar strumming diversity riff "Unruly Heart" (an emotional high point of the film), but the true showstopper comes about three quarters of the way in and is performed by Trent and the high school ensemble in the middle of the mall.

This number, "Love Thy Neighbor," is a peppy tongue-lashing toward the bigoted homophobic crowd who cherry pick what they believe and don't believe in the bible. As Trent teaches the kids about tolerance and empathy, the true essence of the film (love thy neighbor indeed) comes through in a brilliant number that seems to take equal parts from High School Musical and The Book of Mormon, which is perfect since Trent is being played by Andrew Rannells, one of the original stars of the Tony Award winning smash Broadway smash about singing disciples of The Jesus Christ of Latter Day Saints.

So, even if the in-between scenes lack any certain kind of je ne sais quoi (and let's face it, this is a problem with many a musical and perhaps shouldn't be all that looked down upon), the musical numbers, all written by multiple Tony Award nominees Matthew Sklar & Chad Beguelin, as well as the all-in Mickey & Judy attitude of Streep, Corden, Kidman, Rannells, Key, Pellman, and the rest of the ensemble, make this one hell of a fun ride. True, in the end, there are no surprises. Of course everyone, even Kerry Washington's helicopter mom and head of the bigoted PTA, comes around to the idea of loving thy neighbor - and her daughter who finally comes out to her. This idea, the crux of our morality tale, could use a lot more spreading around (instead of that damned virus) in this rather divisive age of hate-mongering by so many. The Prom, though perhaps not the greatest musical of the day, ends up being the voice of reason and inclusiveness that is so needed today. And it's a lot of fun too. 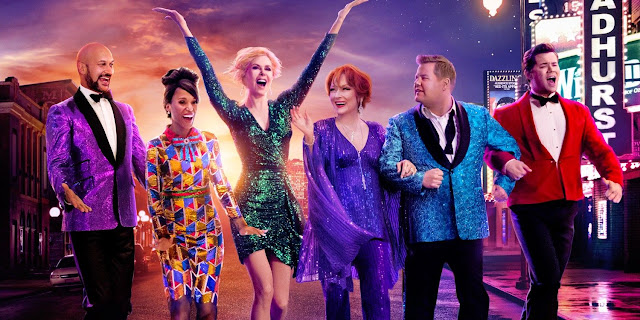