When one thinks of Guillermo del Toro, one thinks of the cinema of the macabre. Cinema with a supernatural bent. Films such as The Devil's Backbone, Pan's Labyrinth, or the Oscar winning The Shape of Water. Well, the Mexican Maestro's latest film is a departure of sorts. Nightmare Alley is a film noir - but even though it technically doesn't delve into the supernatural, it does still have that certain del Toro je ne sais quoi. And it has it in spades.

Adapted from William Lindsay Gresham's 1946 novel by del Toro and his new wife, Kim Morgan, a film critic and historian, and possibly a soon-to-be Oscar nominated screenwriter, Nightmare Alley is the story of a grifter who gets a bit too into his latest grift. Starting in the seedy world of carnies before expanding into the equally seedy world of nightclubs, Nightmare Alley is pure unadulterated noir. Save for a neo-noir movement in the 1980's & 90's, we haven't seen true noir like this since the hey day of the studio system. Del Toro and Morgan bring back the film noir in style.

Granted, even though there are twists and turns throughout the film, which is a mainstay style for the genre, nothing ever really surprises here. But that doesn't really matter as the combination of del Toro's auteuristic style and the bravura performances of Bradley Cooper, Cate Blanchett, Willem Dafoe, Richard Jenkins, David Strathairn, Rooney Mara, Ron Perlman, Toni Collette, and Mary Steenburgen, make this an extremely watchable nightmare.

Cooper, who is often the chewy yet bland center of a film, makes his own breed of everyman work for him here as Stanton Carlisle, a lonely grifter single-mindedly looking for the bigtime. Collette amazes, as always, as Zeena, the carnie mentalist who teaches Stanton a bit too much. Blanchett also amazes, and again as always, as the film's femme fatale. Strathairn does a brilliant turn as the carnival's resident booze hound, and Dafoe is, well he's as Dafoe as ever as the carnival barker and geek handler. As I said, the cast give it their all for del Toro, and it makes the film all that much greater.

There had been a 1947 movie version of this novel. It was directed by Edmund Goulding, and starred Tyrone Power, Joan Blondell, and Colleen Gray in the roles now taken on by Cooper, Collette, and Blanchett respectively. But del Toro claims to have read the novel before he ever saw the movie, and therefore this is an adaptation, and not a remake. Considering this version follows the book much more closely than the 1947 version, this critic will take what del Toro says as gospel.

What we get in this adaptation is a much darker look at what can happen to a man who tries to grab it all. The 1947 version has a scene of redemption in its finale (as many Hollywood films of the time had to have in order to get past the censors), but there is no sign of redemption in del Toro's film. It is a bleak story from beginning to end, with no redemption, no silver lining in view anywhere. It is this lack of redemption, this macabre look inside the human soul, that makes this film sizzle with its dark energy. This is what what makes this film so jarring - even if we are never really surprised by anything in it. It is the falling of that aforementioned human soul, and it's psychological ramifications, that makes this film as goddamn brilliant as it is.

Not to give anything away, but later in the film, when we return to the world of the carnies, we see glimpses of characters straight out of Tod Browning's Freaks. One could even claim this as a spiritual prequal to Browning's 1932 cullt classic. Gooble gobble. Gooble gobble. One of us. One of us. I'll accept it. 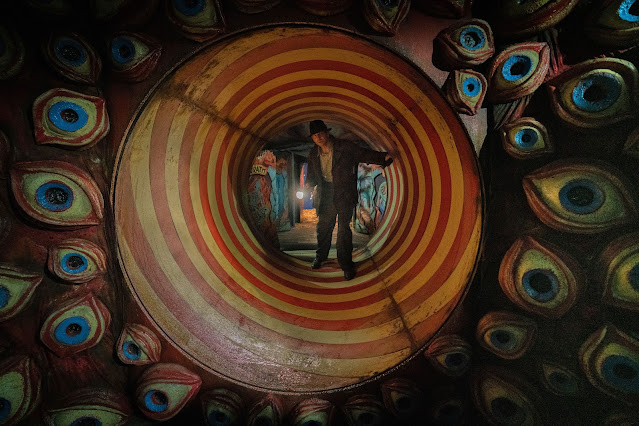