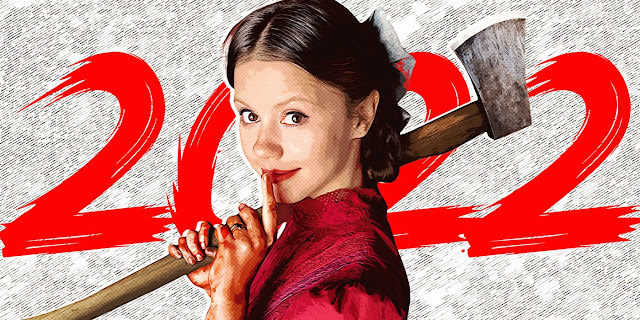 25. Bullet Train (David Leitch) - Directed by David Leitch, the man responsible for John Wick, as well as the director of Deadpool 2 and one of the Fast & Furious movies (can anyone tell them apart anyway) this is a non-stop action comedy headlined by a fabulously fun Brad Pitt as a reluctant assassin.

24. Triangle of Sadness (Ruben Östlund) - Winner of the Palme d'Or at last year's Cannes Film Festival, this is a strange little comedy about class warfare amongst marooned yacht passengers and personel that brings on the Luis Buñuel vibe big time.

23. Glass Onion: A Knives Out Mystery (Rian Johnson) - Slightly better than the first movie, this second installment in the series is a fun romp full of sharp-witted humour and a spot-on cast.

22. Happening (Audrey Diwan) - A devastating look at just why a woman's ability to choose is so incredibly important in both the physical and emotional state of a woman's well being.

21. Bones & All (Luca Guadagnino) - Guadagnino teams up once again with Timothée Chalamet for this delightful cannibal love story. And to think, they didn't bring back Chalamet's costar in Guadagnino's Call Me By Your Name, Armie Hammer for this one. The casting would have been perfection.

20. The Menu (Mark Mylod) - A dark twisted movie about food and power and how to make the proper s'more. For those that have seen the film, that last line was hilarious. The film is pretty hilarious too. Or maybe i'm just dark & twisted myself.

19. Don't Worry Darling (Olivia Wilde) - This film was maligned by a lot of critics (mostly men btw) for it's unrealistic feel and supposedly contrived ending, but this critic (also a man btw) loved it and found it a great take on the ignorance and self-absorption of the incel in America.

17. Apollo 10 1/2: A Space Age Childhood (Richard Linklater) - I admit i wasn't a fan of Linklater's first two rotoscope animated films (Waking Life and A Scanner Darkly) but this one hit me in the gut by showing me basically my own childhood on film. Well, with the exception of the whole going to the moon thing.

16. Elvis (Baz Luhrmann) - Audacious and over the top - two things that director Baz Luhrmann and subject Elvis Presley have in common. Austin Butler's breakthrough performance of the year ain't bad either.

15. Men (Alex Garland) - A body horror film based on the evils of the patriarchy. With a history of unravelling deep dark emotions in his films (Ex Machina, Annihilation), Garland succeeds here with the help of yet another stellar performance by Jessie Buckley. There's also that ending.

14. Blonde (Andrew Dominik) - This much maligned film is much better than many critics would have you believe. Just like the films of Lars von Trier (Dogville, Antichrist), Darren Aronofsky (Requiem for a Dream, Mother!), and Oliver Stone (Natural Born Killers), Dominik's film is not easy to watch, but the cinematography, production design, and career defining performance by Ana de Armas, are well worth the time.

13. The Batman (Matt Reeves) - Probably the best Batman to come down the pike yet. Reeves takes the World's Greatest Detective (played wonderfully by Robert Pattinson) and puts him smack dab in the middle of not a comic book movie, but a police procedural, much like David Fincher's Zodiac. The sound. The feel. The look. This ain't you daddy's Batman.

12. The Whale (Darren Aronofsky) - Set up in 4:3 academy aspect ratio and made to look like a stage play (that one lone set keeps the audience as trapped as our protagonist feels) Aronofsky film is just as uncompfortable as one would expect from the guy who gave us Requiem for a Dream & Mother!. And then there's the comeback kid, Brendan Fraser. A heartrendering performance that had this critic in tears multiple times.

11. Decision to Leave (Park Chan Wook) - Park has given us some of the most brutal films of the last twenty-five years. From Oldboy to Lady Vengeance to the utterly brilliant Stoker. Now he steps back to a more reflective mood (though we do still have bloodshed) and hands us his own version of the classic film noir - and more precisely his take on Double Indemnity. I'm shattered.

10. The Banshees of Inisherin (Martin McDonagh) - Martin McDonagh brings Colin Farrell & Brendan Gleeson back together again and they do nothing short of giving career best performances - as do Kerry Condon and Barry Keoghan. The film itself is just pure languid lunacy - but in the strangest, most charming way.

9. The Fabelmans (Steven Spielberg) - Spielberg's look at Spielberg. The prolific director shows us a (semi) fictionalized tale of his own life as a child, teenager, and budding young filmmaker. Michelle Williams as Spielberg's troubled but loving mother is one of the finest performances of the year. And Judd Hirsch? He's only in two scenes but he steals both of them!

6. White Noise (Noah Baumbach) - Baumbach takes his usual dysfunctional family dynamic storytelling and rolls into Roland Emmerich disaster movie territory with his latest film. And after watching this, i very much want to go back to the early 1980's and spend an entire day walking around an A&P - preferably with someone with Greta Gerwig's hair in the movie. If you've seen the movie you know of what i speak.

5. Bardo, False Chronicle of a Handful of Truths (Alejandro González Iñárritu) - One of the best directors working today (a leader of The Mexican New Wave and, along with Guillermo del Toro & Alfonso Caurón, one of the dubbed Three Amigos) Iñárritu gives us his very own 8 1/2. Personal and brilliant, just like Fellini's opus, Bardo is magical realism at it's finest.

4. Everything Everywhere All at Once (Daniel Kwan & Daniel Scheinert) - There is really no good way to describe this film. I mean, i could but we would be here all day. Go and watch this crazy multi-dimensional (the best multiverse movie of 2022 - sorry Dr. Strange) Gordian Knot of a movie. Michelle Yeoh will show you the way. Then we'll talk about it. And talk and talk and talk.

3. Babylon (Damien Chazelle) - Though i was luke warm on La La Land, for which he won the Oscar (but famously lost Best Picture) Damien Chazelle's newest film is a hedonistic parable on Old Hollywood. Telling a very similar story to Singin' in the Rain (the coming of Sound into the Studios of Hollywood) and actually paying exquisite homage to the classic, Babylon takes an obviously darker route in it's narrative, ending in a beautiful coda to the cinema and everything that makes us love it - warts and all.

2. Nope (Jordan Peele) - One of many films from this past year that play at either homage to or reference the magic of Hollywood, Peele's third film as director is a no holds barred sci-fi horror masterstroke that incorporates his love for Hollywood history and his love for horror films into one batshitcrazy ride of a lifetime. And that opening scene? Wow! And that finale? Wow! And everything inbetween? Wow!

1. Pearl (Ti West) - To anyone who knows me, this should come as no surprise. Plus her picture welcomes you to this post. As i stated in my original review, this movie is what one would get if Alfred Hitchcock had dropped acid and remade The Wizard of Oz. The prequel to West's 1970's set slasher movie X, Pearl takes place in 1918, on a farm not unlike the one Dorothy lived on in Kansas. Well, if the wicked Miss Gulch ran said farm. Pearl dreams of escaping to Hollywood (somewhere over her rainbow) but life has other plans. Twisted plans indeed. The film is shot to resemble a Technicolor masterpiece (complete with the most Bernard Hermann score one could come up with) and Mia Goth is spectacular in the title role. And that final shot? Goddamn brilliant!

That's it Gang! See you at the Movies!