Well here we are again film fans. Time for that fun annual obligation, the top ten list. That time of the year where i let you know my opinions on what i believe to be the best films released in the US over the past calendar year. So without further ado, here we go. 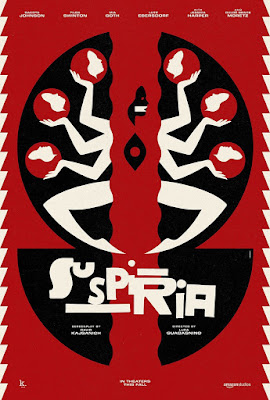 1. Suspiria (Luca Guadagnino) - The Dario Argento original is a masterpiece of suspense and horror...one of the finest and most artistic genre films ever made. Guadagnino's remake, or retread if you will, may not be quite to that level (though close), but it is still a daringly spectacular look at a coven in 1977 Berlin. More in common with Cronenberg's body horror mileau, than Argento's creepy style, this updated film is a twisted work of art, a Grand Guignol of cinema, that takes on the  ultimate power of women in society...and is the best damn film of 2018.

2. The Favourite (Yorgos Lanthimos) - Lanthimos, one of the most interesting filmmakers working today, has given us his most  accessible film to date (though still weird enough to scare away the pedestrian riff raff), as well as his most Kubrickian film. A subversive, dangerously intriguing film about the abuse of power...and the attempted abuse of power by those who do not have it. Olivia Colman, Rachel Weisz, and even Emma Stone, are all fabulous in their roles...and the film itself, reminiscent of Kubrick's Barry Lyndon, is gorgeously luscious from whimsical start to oh so disturbing finish.

3. BlacKkKlansman (Spike Lee) - The almost impossibly true story of Ron Stallworth, an African American cop who infiltrated the KKK in the early 1970's. Spike Lee, a brilliant filmmaker who doesn't often get the recognition he deserves (wonder why that is...wink wink) has filled his comedy/drama/action hybrid with scary truths about race in America (and times are no better now than they were in the 1970's), and has speckled it with a dark, awkward humour (laughs you actually feel bad about taking) and managed to make the laughs and drama happen nearly simultaneously. Brilliantly subversive.

4. Roma (Alfonso Cuarón) - Based on the director's own childhood in 1970 and 1971 in the Roma neighbourhood of Mexico City, this succulent drama, shot, by Cuarón himself, in crisply beautiful black & white, tells the story of a young housekeeper for an upper middle class family (wherein Cuarón was the youngest child) and tells it in a steady yet intense manner. Part Fellini, part Tarkovsky, Cuarón's use of long quiet tracking shots (something the director has become a master of) brings a silent seething vibrancy to this beautiful film. The performances, especially that of Yalitza Aparicio, in her film debut (and now Oscar nominated performance as well), make it soar even higher.

5. First Reformed (Paul Schrader) - Paul Schrader has made a career out of creating lost characters. From Travis Bickle in Taxi Driver, a film that is earily parallel to First Reformed, all the way up to Ethan Hawke's lost soul preacher here, Schrader has made a living out of creating characters that are simultaneously both tragic anti-heroes and pathetic broken men.  Filmed in a static Bressonian manner, with more than a few hints of Dreyer, with two breathtaking moments of surreality intertwined (that mesmorizing final scene, a scene we still are not sure how to interpret! Wow!) and with a performance by Hawke that puts every other performance of 2018 to shame (how is he not nominated for an Oscar!?), First Reformed is a tour de force of socio-religious chutzpah.

6. Annihilation (Alex Garland) - From the novelist that gave us The Beach, and the screenwriter who gave us the scripts for 28 Days Later, Sunshine, and Never Let Me Go, as well as the man who made his directorial debut with 2014's brilliant Ex Machina, Alex Garland is a powerful, if still not all that well known, voice in modern cinema. With his sophomore directorial effort, he weaves together a sci-fi fantasy  tale of aliens on Earth, and then delves into the very realm of god him or herself. Natalie Portman, along with a strong supporting cast, help Garland bring his gorgeous film to light.

7. Happy as Lazzaro (Alice Rohrwacher) - The most Felliniesque film on this list (and it has some good company), Happy as Lazzaro is poetic realism at its finest. A story of sharecroppers being oppressed  and abused by their illegal landlords, Alice Rohrwacher's film, also with allusions to Di Sica, leaps seemlessly into a fantasy realm of tragic beauty and savage melancholy.

8. Wildlife (Paul Dano) - Paul Dano's deceptively quiet directorial debut, allows its actors to free range their performances...as most any actor turned director is apt to do. Jake Gyllenhaal is pitch perfect as the sad sack husband & father, but Carey Mulligan and 17 year old Aussie actor Ed Oxenbould, as put-upon mother/wife and wayward but loyal son respectively, give two of the most spectacular performances of the year.

9. The Death of Stalin (Armando Iannucci) - A black comedy and political satire, The Death of Stalin comes from the sardonic mind and eye of Armando Iannucci, the man who gave us the UK TV show The Thick of It, and its film version, In the Loop. Biting and witty, this power struggle satire is (sadly enough) just as poignant in today's political landscape is it would have been in the 1953 Soviet era it is set in.

10. Eighth Grade (Bo Burnham) - Musician, poet, stand-up comic. Now Bo Burnham can add movie director to his resume...and what a damn fine debut it is. Starring 13 year old Elsie Fisher (the voice of Agnes in the Despicable Me films) as an awkward teenager (is there any other kind?) about the make the jump to high school, Eighth Grade is a square-in-the-face, non-sugar coated look at that oh so awkward time in life...and Fisher gives a bravura performance in thd central role. Huzzah!

Eleventh Place: The House That Jack Built (Lars von Trier) - Since i can never stop at just ten, i just had to include this disturbing (although not by von Trier standards i suppose) film starring Matt Dillon (in one of the best performances of the year) as a serial killer. Perhaps not up there with von Trier's slate of masterpieces (Dogville, Breaking the Waves, Melancholia) but still a powerfully treacherous film with a powerfully treacherous central performance.

Special Mention: The Other Side of the Wind (Orson Welles) - First began in 1970, Orson Welles, 33 years after his death, finally, with the help of Netflix, sees his final(esque) film make it to the screen. Finished by long-time Welles fanatic Peter Bogdanovich, who also stars in the film along with the late great John Huston, The Other Side of the Wind tells the story of a famous director trying to create what will be his final maligned masterpiece. Sound familiar Welles aficinados? Yup. It technically is and isn't a 2018 film, but i just could not leave off such a wonderful film by one of the greatest filmmakers to ever exist, so into the special mention spot it goes.

And some runners-up (in no particular order): A Star is Born, The Ballad of Buster Scruggs, Black Panther, Mandy, The Sisters Brothers, Blindspotting, Isle of Dogs, Jeannette: The Childhood of Joan of Arc, Did You Wonder Who Fired the Gun, Game Night, Support the Girls, Sorry to Bother You, Bad Times at the El Royale, Avengers: Infinity War, and Ready Player One. 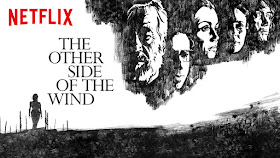